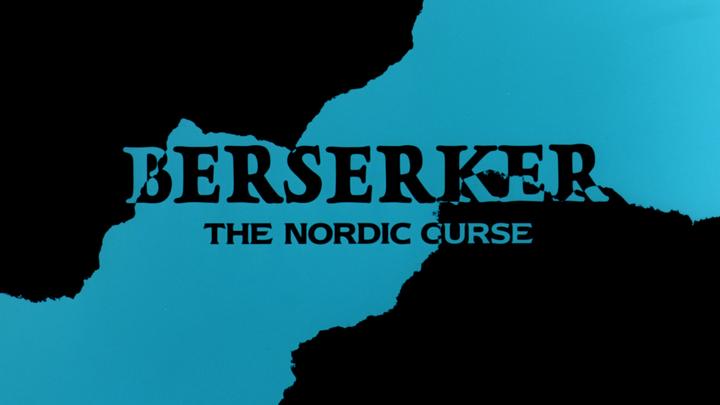 Sometimes just the premise of a movie is enough to make in an impulse buy. BERSERKER, out now on Blu-ray from Vinegar Syndrome (easily becoming my favorite label), is one such film.

There is a legend about certain viking warriors called berserkers who wore the skins and snouts of animals and were ferocious in combat. However, if they ate human flesh, their spirit was doomed to be reincarnated in their offspring until the line was no more. What does this have to do about a movie set at a campground? Well it seems that there have been some murders up in that area and it isn’t clear if it is from a bear attack or if somehow a viking spirit has made its way to the area and is once more seeking foes to slay.

The hapless victims of the killer are a group of teens going away to camp for a few days so that they can drink and have fun and screw around. Josh Winter (Greg Dawson) has been going to camp in that area for years and has the perfect spot all picked out. However he didn’t reserve it in advance so Pappy Nyquist (George “Buck” Flower), the campground manager and a true character, tells him to go to a different area of the camp. Being the petulant ass that he is, Josh ignores Pappy’s request and heads to the spot he and his father used to go to, which is currently occupied by an elderly couple who are camping there. Fortunately they got killed and aren’t around at the moment so Josh hides their tent and he and his five friends move into the cabin, which is more of a shed and all one room but nobody else seems to mind. Then they begin their vacation. Little do they know that whatever killed the old man and his wife is still out there and thirsty for more blood.

While the plot isn’t much to write home about, the idea of a berserker being out in the woods is a unique approach that adds a nice level of mystery to the film. You don’t often see killers inspired by Nordic history so it is a nice change from the usual masked maniacs by writers Joseph Kaufman and Jefferson Richard, the latter of which served as the director as well. Most of the kills take place from the POV of the killer, and we’re not sure who the pawed hand belongs to until the end. Sadly this does neuter a lot of the murders and they end up being variations of blood being smeared onto the victim. Interspersed with shots of a real bear (Bart the Bear, who you may recognize from THE GREAT OUTDOORS), we aren’t quite sure if the killings are done that way due to budget and safety concerns. Thankfully, this is answered in the end with one of the most epic battles in a slasher movie ever put to film. I don’t even want to spoil it for it is truly the highlight of the film.

The cast playing the teens are fine and do well with the material they have, which is drinking, screwing and screaming, but the real standouts are Pappy Nyquist and his cousin, Officer Walt Hill (John F. Goff). These two veteran actors give a fantastic performance. Officer Hill is clearly concerned about kids going into the area where people have been killed and warn them away and even comes back to check on them, seeming extra pensive as if he knows the truth about what is out there. The way Goff and Flower play off each other is amazing, with several spots of dialog improvised on the spot but filling out the backstory of the characters and making them come alive. There’s a bit about a chess game between the two of them that I could have watched for an hour.

The cinematography is pretty good too, with most of the film taking place during the night and filled with fog that obfuscates the forest and any attackers it might hide. It also makes everything pretty damn creepy and makes it very believable that even someone familiar with the area could get lost in the woods. There’s also a strange sequence that cuts between one of the girls making love to her boyfriend and the other being murdered that is rather dreamlike and rather beautiful in its own way.

I’m looking forward to checking the special features out, particularly the video interview with the director to see what exactly might have inspired them to use a berserker as the menace. As with most of the Vinegar Syndrome titles I’ve see, said special features are plentiful and should be an entertaining supplement to the movie.

It’s not a perfect film but it is fast and fun and definitely unlike a lot of the slashers out there. Worth it for the one fight scene alone, and you’ll know what I’m talking about when you see it.