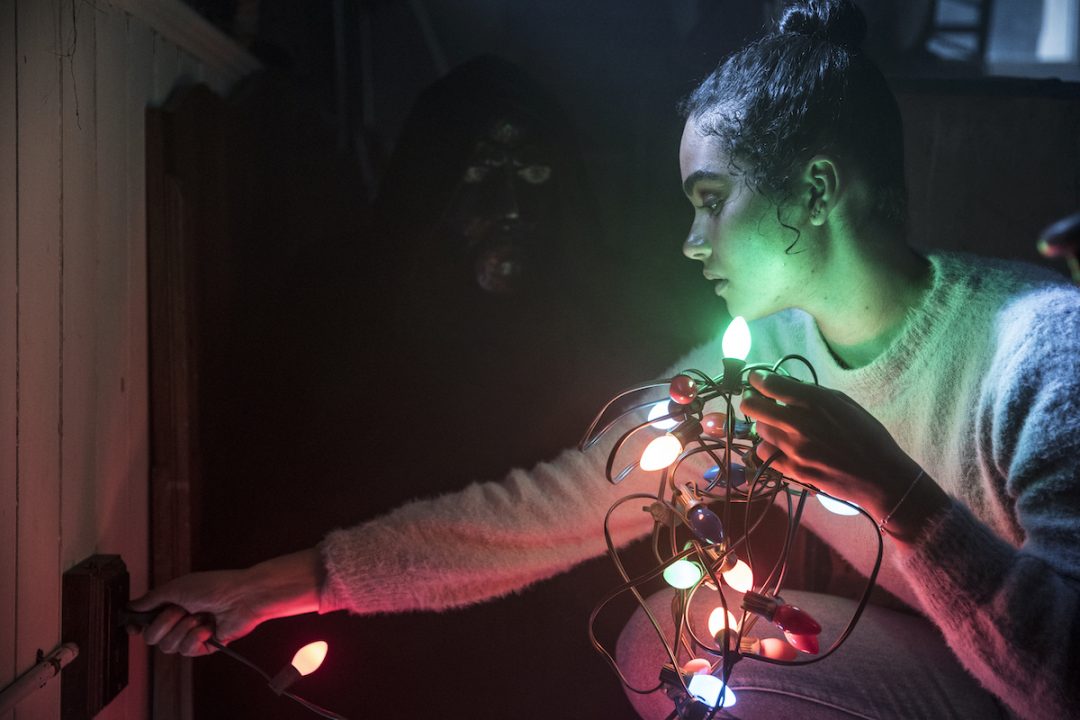 No lie, the original BLACK CHRISTMAS is one of my favorite movies. I still remember the first time I watched it late one December night with my Dad after I taped it off of cable. Since then it has been a tradition of sorts to give it a viewing every year. The first remake, (BLACK XMAS), intrigued me but was ultimately a letdown for me as I had issues with the amount of backstory they gave the slasher and how it almost made the Michael Myers from Rob Zombie’s HALLOWEEN seem like he had a normal family life. So when I heard they we remaking BLACK CHRISTMAS again, I had some trepidation. This time, however, the movie was right in my wheelhouse.

BLACK CHRISTMAS, as you may know, is the story of a sorority house being terrorized by an unknown killer who makes strange phone calls to the house. The first remake hewed close to those points, but the new one has jettisoned them completely. In fact, I would liken it more to a sequel along the lines of HALLOWEEN III: SEASON OF THE WITCH in that it takes the name and the holiday and does its own thing. Screenwriters Sophia Takal and April Wolfe have their movie set during Christmastime at a college, but the similarities end there for the most part. We open with a young sorority sister walking home from the library where she meets a cloaked assailant who does her in with an icicle. After that we focus on her sisters, with Riley Stone (Imogen Poots), Kris, Marty and Jesse, who are working to put on a talent show performance at one of the frats and also a dinner party for all of the other students who weren’t able to go home for the holidays. However, things don’t seem to be going as planned as the same cloaked person from the beginning starts taking them out one by one. Now the girls have to figure out the identity of the nefarious assailant and stop him before he makes this silent night a bloody one.

The film wears its heart on its sleeve and I can appreciate it. Whereas the original film was a little more subtle with its feminism, it is right up front here. Fraternities are painted in a bad light, a misogynistic professor has a petition against him to be fired for his refusal to teach books written by anyone other than white men, and date rape and assault are a major focus and plot point as Riley is a victim of one of the fraternity brothers and still working to build herself up from it. For some it might be too direct, but I found the refusal of the movie to bury these stories behind subtleness or suggestion. The other prominent theme is the need for the girls to stick together as they know that they have more power combined than they do being picked off one by one.

That each of the main characters is well-rounded and not just a caricature helps matters. We feel the grief and anxiety that Riley is going through, the rage that Kris has at social injustice and the concern Marty has for both of them. Not to mention Jesse’s desire to cook a ham. None of them are catty or snippy for the sake of it. They help one another and nurture each other. They are living and breathing people in the world that has been crafted and we want them to succeed against the forces that have been aligned against them.

Probably the only failing is that the villains of the piece don’t get the same treatment. You know who is behind the killings from the beginning and if someone acts like an asshole, they most likely are, save for one of the twists that helps set up the ending. Speaking of which, the less said about that the better. It is telegraphed rather heavily, so for people to say it came out of nowhere is a little bit disingenuous. Perhaps it doesn’t get as much time to explain the mechanics of it but the basics of it are laid down early on in the movie in a few lines. That doesn’t mean you don’t feel any sense of comeuppance once they do fight the killer, it’s just that there could have been so much more if we were allowed a few more scenes with them.

I can’t say I’m familiar with any of Director Takal’s previous output but the movie is well directed and put together and there are some downright beautiful scenes in it, especially when scenes are only lit by Christmas lights. The rest of the cast is great too, with Cary Elwes being the most well known and smarming it up quite well as Professor Gelson. I was surprised going in that the film had a PG-13 rating, but that doesn’t affect the scares much and in fact helps set up a nice misdirection later on. So if you are looking for gore, you will be disappointed but the set pieces for the kills are well done with a nod to EXORCIST III to boot as well!

It is a shame the movie didn’t do better at the box office and I can’t help but wonder if the Black Christmas name had an effect on that from those who consider it to be untouchable. Or they were banking on the name doing more of the lifting in terms of drawing interest from viewers who might just not have been familiar with it. I wish they had as it is a fun entry into the series and a refreshing one at that.