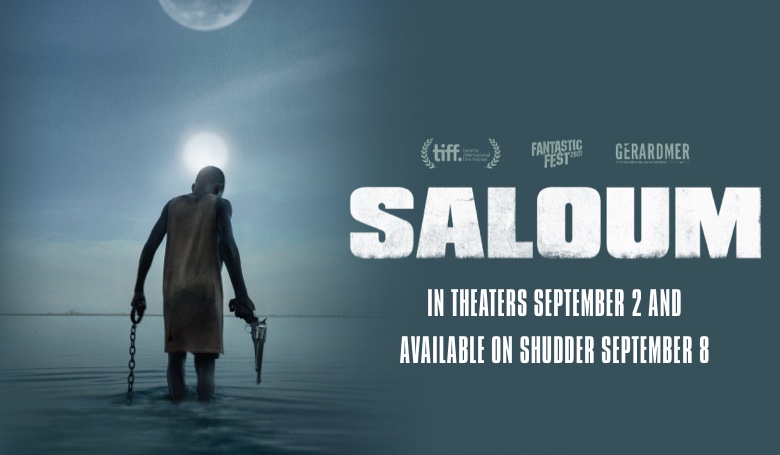 I love it when a movie I have never even heard of pops up on my radar. In this case, it was SALOUM, which I found out about from someone mentioning it on Twitter. Since I had a free night and saw it was on Shudder, I decided to give it a shot. I’m glad I did as it was a blast.

At first glance, SALOUM doesn’t seem like the type of movie you would find on Shudder. It follows a group of mercenaries called Bangui’s Hyenas–Chaka, Rafa and Minuit–as they extract a Mexican drug lord from a coup in Guinea-Bissau so they can get their reward. Their plane springs a leak so they are forced to land in Sine-Saloum where they take refuge at a retreat of sorts. It seems harmless enough but as they help out with tasks under their guise of vacationing gold miners, they find that things might not be as bucolic as they thought. Chaka in particular seems to have something he’s hiding from his comrades, but how does it tie into the village and the owner of the retreat? And what about Awa, the deaf mute that threatens to out their identities to the police captain vacationing there unless they take her with them? It all comes to a boil in the finale where these questions are answered and everything goes literally to hell.

Taking cues from westerns, crime thrillers, Southern revenge movies and FROM DUSK TILL DAWN, SALOUM is a unique blend that tells a gripping tale of three men who have unwittingly entered the unknown. It’s sweaty and sticky, as the mercs literally drip with it in the heat of the African sun. The cinematography is wonderful, capturing the innate beauty of the land in every frame and making us feel like we are right there in the heat with them as they try to get out of their predicament. The supernatural elements they are up against are unlike any that I have seen and are convincingly eerie and terrifying once they show up.

The cast is great. It’s easy to believe that the three men are comrades who have been through thick and thin and when there is a betrayal, you believe they are wounded by it. I would love to see more of their exploits and hang out in their world a little bit longer.

If you want a horror movie that is a little off the beaten path of zombies, werewolves and slashers, give SALOUM a try. You won’t be disappointed.