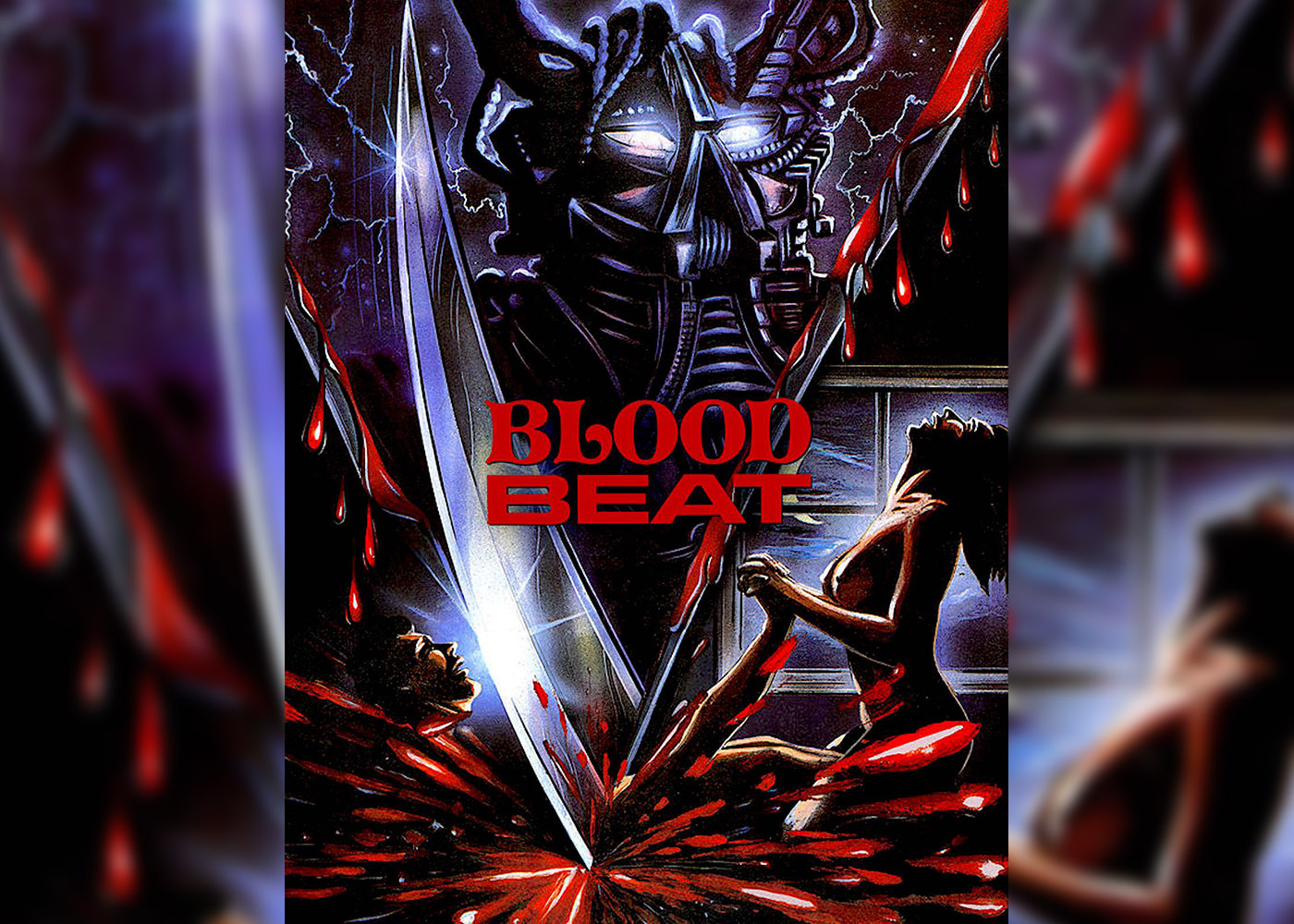 One of my great joys in the horror genre is holiday horror. There’s something that just feels so right about mixing the two, be it with the savage nihilism of BLACK CHRISTMAS or the gleeful zaniness of GREMLINS. Christmas and horror just go together so well. Maybe it is something about subverting what should be a happy time for everyone and instead turning a dark lens on it. While it is fun to revisit the old standbys, there’s something to be said about discovering a new gem of Christmas horror, or in this case and old one.

BLOOD BEAT is weird in all the right ways. The tale revolves around a family getting together for Christmas in Wisconsin being stalked by the ghost of an evil samurai that has possessed the girlfriend of their son. Even reading that doesn’t really prepare you for the strangeness you will find throughout the film. Ted thought he was just bringing his girlfriend Sarah home to meet his mom and her boyfriend, not to mention his sister and crazy uncle. Right off the bad, Sarah and Cathy do not get along, sharing a strange look wherein Cathy detects something wrong about the girl, even if we don’t. You see, Cathy is an artist and in tap with her spirituality and is attuned to such things. Still, she allows Sarah to stay in the house and the whole family sans Cathy go out on a hunting trip. Sarah gets freaked out by the idea of killing animals and runs away, only to encounter a man who is dying from slashes he suffered. While dying, he might also have transferred something to Sarah during a creepy flash frame. That night, Sarah has a dream vision about a trunk she opens containing the sword and armor of a samurai. As you might have guessed, this was a bad idea and the mayhem begins.

But not in the way that you might think. You see, this isn’t like NINJA III: THE DOMINATION where Sarah runs around possessed and killing people. No, she is linked to the spirit as it goes around killing and when it does off people, she gets sexual pleasure out of it, at least when she’s sleeping and or having sex. And that is probably the least batshit insane thing that is going on in the movie. There’s glowing sword strikes out of nowhere, flying canned goods, glowing hands in both red and blue variations, discount PREDATOR-vision, psychic fights between Sarah and Cathy, psychic fights between Sarah and Ted and his sister Dolly, random harmonica playing, mystical boinging and stock WWII footage. And I’m probably leaving something out. Somehow it all comes together and makes a fun if not fully coherent film that will keep you watching to see what happens next.

It should come to no surprise that writer/director Fabrice-Ange Zaphiratos was under the influence of a lot of drugs as we jump from one set piece to another with little connecting them outside of the family story. It’s played straight, which helps sell it, and the samurai at first is sparsely used which does allow for some tension, though that all goes out the window and by the time we get to the end, we are almost in MANITOU territory. There’s no explanation for the samurai or why he is there, though it appears he has a grudge with Cathy from years past that other family members are in the know about but we are never clued in. The movie is scored almost constantly, and there are very few silent bits once we get into it, alternating between an oppressive synth score and library classical music (the end fight is to Dies Irae!). It both hurts and helps, as the music does keep the slower parts from dragging but it wears out its welcome. All of the actors are decent given the material and they all get their time to shine and make some crazy facial expressions. It doesn’t appear that any of them went on to anything else of note which is a shame as they deserved another shot, particular Sarah, who goes from nervous outsider to samurai killer quite well.

BLOOD BEAT is definitely a movie that will test your suspension of disbelief and possibly your sanity as you watch it, but it is a fun and unusual slasher that is a little rough around the edges but makes up for by never thinking any idea is too bizarre to put into the film.