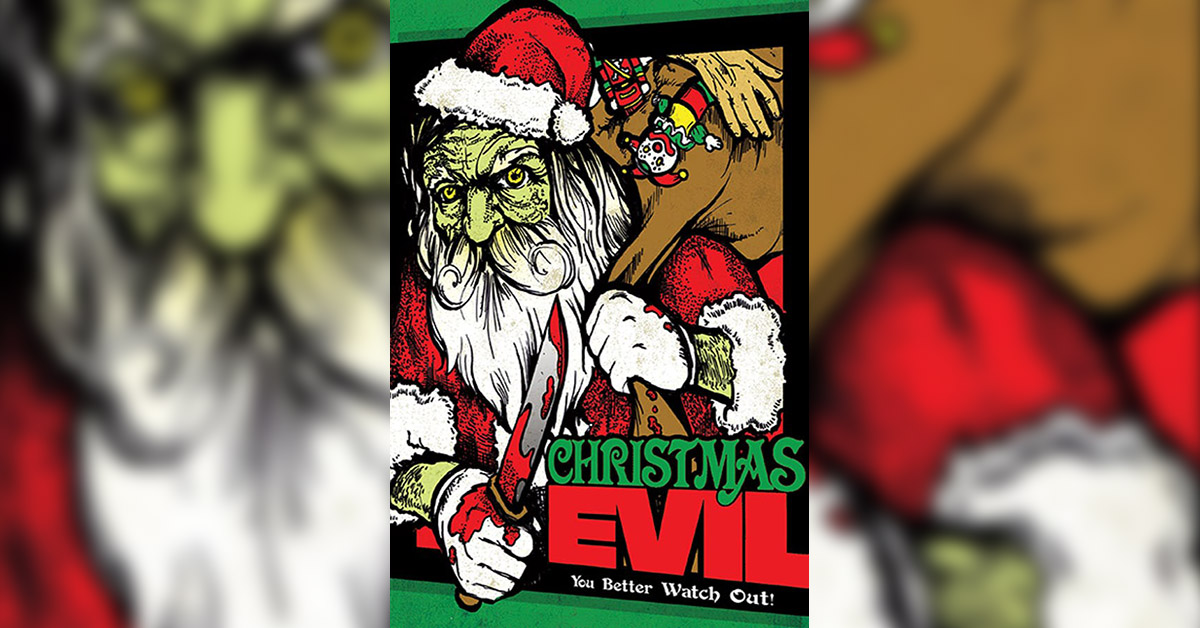 Christmas-set slashers are pretty popular, especially when said slasher is the man in the red suit himself. From the promotional material and poster, that’s what CHRISTMAS EVIL appears to be. I was delighted to find out that instead we got a character picture of a mentally ill man who thinks that he is actually Santa Claus and rewards good people with presents and those who are bad with worse. It is similar in that regard to FADE TO BLACK, where we know that the lead has done some reprehensible things, but we root for them to maybe turn it around and get the help they need instead of hoping they fail and fall.

Harry Stadling loves Santa, however as a child he witnessed his father dressed as Santa Claus getting it on with his mother by the Christmas tree, which sent the poor boy into a fit of despair that ended with him shattering a snow globe and cutting himself on it. Not quite the way he thought spying on Santa might end up. We then cut to 33 years later where Harry (Brandon Maggart) is an adult and working at a toy factory in New Jersey where his co-workers don’t particularly like him. Even his own brother Phil (Jeffrey DeMunn) thinks he’s strange and is often angered by the fact he has to look out for his older brother. Turning away from that reality, Harry believes himself to be a Santa of sorts and lives in an apartment filled with Christmas decor and keeping notes on the local children to see who is good and who is bad. We’re looking at you for the last part, Moss Garcia. He still keeps his fascination with Santa and watches for him at the end of the Macy’s Thanksgiving Parade as if he were still a child.

After finding out that the promotion his company is running about donating toys to kids in a hospital is just a scheme that has nothing to do with the kids at all, Harry gets mad and steals toys from the company, stuffing them into giant sacks. Then, on Christmas Eve, he dons his Santa costume and goes about rewarding the good and punishing the wicked.

Instead of going straight into a berserk rage, Harry’s breakdown is handled carefully as he teeters from doing things that are filled with the holiday spirit and those that would put him on the naughty list of the real Santa. In one instance he breaks into a co-workers house and surprises the kids there with presents, only to brutally murder their no-good father later. It is that kind of juxtaposition by writer/director Lewis Jackson that keeps us rooting for him despite being utterly appalled by Harry’s behavior. Kudos to Maggart for his performance as Harry as he never goes over the line of pure mania or camp and plays the role quite straight, which only adds to the tragedy of the character.

After viewing it, I can see why John Waters is such a fan, as the film is an interesting study of both the downfall of a man as well as the holiday he loves, where people are more concerned about what they are getting than any goodwill towards men. At his best, Harry embodies what we all believe Santa to be and the delight he brings to children and adults with his selfless acts is a sight to see. But at his worst, Harry is no better than those he seeks to deliver punishment on as he becomes selfish and destructive, going far beyond the delivery of coal and turning Santa into an instrument of fear.

It is a heavy film for the holiday to digest, especially if you’re looking for some light and airy horror to escape the humdrum of the holidays, but CHRISTMAS EVIL is worth seeing for those who have some time for the seriousness of it. That’s not to say there aren’t some ridiculous and humorous parts in it (here’s to you, torch-wielding mob in the streets of NJ!), but for the most part it is a somber examination of a man who breaks down and in an attempt to become a beacon, becomes something much more sinister instead.

PS: It’s always a treat to see my home state in a movie, and CHRISTMAS EVIL really captures the feel of the suburbs of northern NJ where I spent many a holiday over the years visiting family. If I gave ratings, it would get bonus points for that. Sadly I didn’t see any landmarks that I recognized but the Pressman toy factory in New Brunswick makes an appearance so that is a bonus for those from that area.