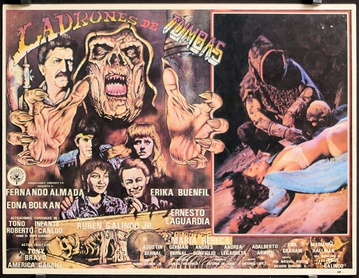 My experience with Mexican horror films is rather woeful. I’ll chalk some of that up to the limited selection offered by my video store as a kid. However, my childhood was quite a few years ago and this is the 21st century so there are plenty of ways to fill in the gaps in my knowledge. Thanks to a beautiful new blu-ra from Vinegar Syndrome, I decided to start with GRAVE ROBBERS, aka LADRONES DE TOMBAS. I’ll be honest, the cover of the blu-ray was what drew me in, with a robed character that brought to mind the templars of TOMBS OF THE BLIND DEAD. I’m glad I picked it up as the film is a wild ride.

In a small Mexican town during the Inquisition, an executioner for the church has turned to Satan (am I on a roll with these Satanic movies or what?) and he decides he will try and impregnate a captive woman so she can give birth to the antichrist. The clergy arrive to stop him and capture him, which then leads to them torturing the hell out of him to get him to renounce Satan. As you might expect, it didn’t work so they kill him by driving his own axe into his chest. The executioner does have time to get out a cryptic warning that he will return if the axe is ever removed. But that won’t ever happen, right?

Cut to centuries later where Olivia, the daughter of the local police captain, and her friend are getting ready to go camping with some of their friends from out of town. Unfortunately the spot they pick is near the cemetery where the old church the executioner was buried in is located. This is important because also on the scene and looking for some loot are the friendly, neighborhood grave robbers. One of them is psychic and can sense gold, but the grave they open has nothing in it–until the bottom of the grave gives way to reveal a shaft that leads to the ruins of the church. In there, they find the gold they are looking for, but they get greedy and open a tomb they shouldn’t and end up reviving the executioner. Once the undead executioner regenerates his body from just bones, he grabs his trusty axe and gets to work and gives us one hell of a ride.

With so many moving parts and characters, it seems like the movie might end up being a slog. However, the action gets started rather quickly and then the cast gets whittled down in gruesome ways and just keeps on racing along to the end. Most kills involve the axe but there is a drowning, a choking and even an evisceration. The executioner cuts a terrific figure dressed in his robes, though this is no slow templar. He moves fast, almost teleporting at times like Jason is known to do, and when he shows up, you know people are going to die.

The effects are great, utilizing all practical effects and not skimping on the blood and certainly giving us more of the red stuff in the murders than any of the Friday the 13th movies this one is emulating did. The cast is pretty good too, delivering there lines well though as I am not a native speaker of the language, they sold their fear and emotion with their bodies so being limited to the subtitles wasn’t an issue.

It’s a fine film and definitely worth adding to your collection, especially with the job Vinegar Syndrome on it.