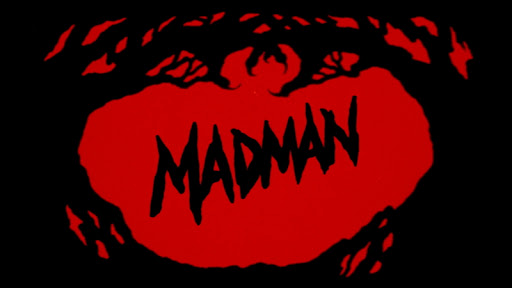 Sometimes a movie just resonates with you and you love it immediately. Other times, it takes a second viewing or more for it to really sink in how special a film is. That is the case with today’s movie, MADMAN. The first time I saw it, I didn’t particularly like it. In fact, I think I almost hated it. What turned me around on it? Honestly, it is a lot of the little quirks the movie had that kept popping up in my mind and had me thinking I might have been too hard on the movie. So I gave it a second chance, and I’m glad I did, as it has become one of my favorite 80s slasher movies.

Set at a camp that is about to close up shop for the summer, MADMAN opens with everyone gathered around a campfire as one of the counselors TP (Tony Fish), sings a spooky song complete with a jump scare at the end to frighten the children. All the while he sings, we see the eventual deaths of all involved. It’s a little spoilery and could take the guesswork out of who is going to go and how, but honestly, the killings are so great that it doesn’t even matter. The head counselor, Max (Carl Fredericks), then tells a story about the local legend of the area, Madman Marz. It seems back in the day, Marz was a farmer who went nuts one night and murdered his whole family. He was tracked down and hung but the body disappeared, and it isn’t know if he was still alive and got free or if it is his ghost wandering the woods. But it is said that if you call out his name, he will come and hunt you down and kill you.

So of course a little shit named Richie has to go and do just that, not realizing that he has brought doom down upon the entire camp.

Betsy (Gaylen Ross), one of the female counselors, is annoyed at the boys for telling their scary stories and they all go and head back to camp. Richie, not satisfied at just awakening the prospective murderer of his friends, decides to stay behind to see if he can see Madman Marz in all his glory. He does spot him in a tree and actually does not die, but instead follows him to his house, because clearly Richie is testing the limits on how many bad decisions one person can make in a night. But Madman cuts out and heads to the camp, leaving Richie behind while he begins a night of terror.

Based on the Cropsey legend of New York state (one of two–the other being THE BURNING, which was in production at the same time so MADMAN’s producers changed their story a bit), Madman is a bizarre little film that offers so much enjoyable things to witness. There’s a hot tub mating dance, a fireside chat scene with everyone laying head to head that wouldn’t be out of place in an episode of THE MONKEES, a belt buckle that says TP, an axe buried in a stump that can only be pulled out by a certain person ala Excalibur, fridge hiding, random recorder playing, pen knife murder musings and more. Put it all together and you get a charming mix of characters that you hate to see go but love to watch leave. Sure a lot of the kills are based around going out in the woods to look for Richie, but what kills they are. We have hangings, ax murders, car hood decapitations, throat-slitting and more. And they come at a pace that won’t give you time to get bored.

The effects are great, with plenty of blood to go around. The makeup on the titular character is horrific and makes for a unique, monstrous visage when so many popular slashers of the day were relying on masks. Paul Ehlers plays him with gusto, and he is one of the most energetic killers I’ve seen on film, even if he does remind me of a deranged Ugnaut at times. It’s clear the film was filmed in the chilly November months, giving it an off-kilter feel for when it is supposed to be summer, but that is just another thing to love about it.

Any review worth its salt has to mention the score. The synth soundtrack is striking and minimalist and really helps build up the tension. Standouts for me are the intro tune (and awesome credit art) as well as the ending song, which warns of the legend of Madman Marz. Mondo just recently put out a vinyl release of the soundtrack that is absolutely a worthy pickup for fans of the film.

It’s the perfect film for the fall, even if it supposed to be summer.