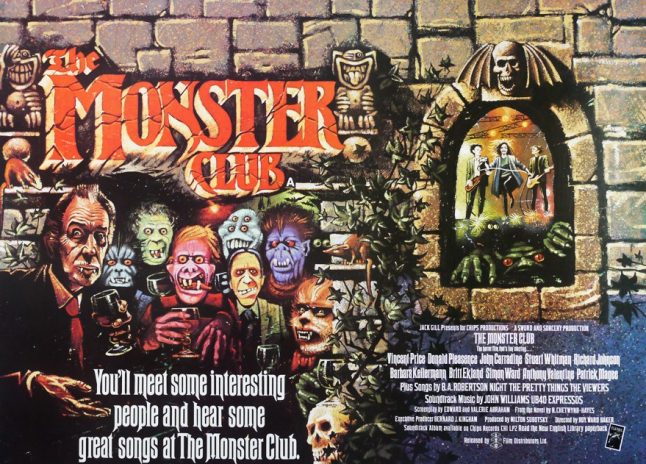 I wasn’t sure what to expect going into THE MONSTER CLUB, other than it featured some of my favorite actors like Vincent Price and John Carradine and Donald Pleasance. I certainly didn’t expect it to be a charming, campy, and ultimately family friendly movie. Or that it would be so unabashedly weird.

The movie is based around an author, R. Chetwynd-Hayes (the actual author of the book the movie is based on, here played by John Carradine) who encounters a vampire named Eramus (Vincent Price) while out for a stroll. The vampire takes a snack of blood from the writer and then to repay him invites him to the Monster Club, where he hopes the author can find inspiration for a new story. Inside, the author finds the club is host to a plethora of strange creatures, as well as full musical acts by bands. Between acts, Eramus tells the writer about several different types of monsters and the stories that go along with them.

In the first story, we learn about a creature called the Shadmock, who looks like a normal person but has a whistle that is feared throughout the monster community for good reason. In the second, we follow the family of a vampire, notably his son, who feels out of place and is bullied and just wants to be spend time with his night-owl of a father. The final tale introduces us to a film director who while scouting out a new location for his horror movie, find a strange town where the strange residents won’t let him leave and may have a sinister motive for it.

All of this sounds like it could be the setup for an Amicus portmanteau film if it were played straight which would be no surprise considering the talent involved. Director Roy Ward Baker had done several films for them, including VAULT OF HORROR and producer Milton Subotsky was one of the founders of Amicus. This time around, we are treated to a colorful and silly version where the monster masks are clearly rubber and played for giggles, the music there to perhaps catch the teens of the bourgeoning MTV generation, and the stories seem more interested in making people laugh than scream.

Of the three tales, the first seems the most in line with a classic Amicus production and indeed, what we see as the result of the Shadmock’s whistle is ghastly indeed. “The Vampires” feels more like a family sitcom/drama than a tale of terror and by the end it has fallen completely down that hole to a delightful degree. “The Ghouls” hews a little closer to seriousness and features a tense chase but injects some necessary humor at the end despite the somber outcome.

The wraparound tale is probably the most delightful of the three as it is a real treat to see Price and Carradine bouncing off each other. The whole club is a goofy delight, featuring all sorts of strange creatures and includes a werewolf that looks like he could have been the template for Harold Howard in TEEN WOLF. I’d say the musical acts are the most bizarre bit, but only then because they let them go on for a full song, almost like it was a precursor to David Lynch doing the same in TWIN PEAKS: THE RETURN. The songs are good for the most part and pleasant to listen to if you are a fan of 80s music. There’s also a variety, so it isn’t a chore to listen to them like you get in some films where they end up repeating a terrible song over and over again. Add in a ludicrous ending and you have the makings of one fun movie.