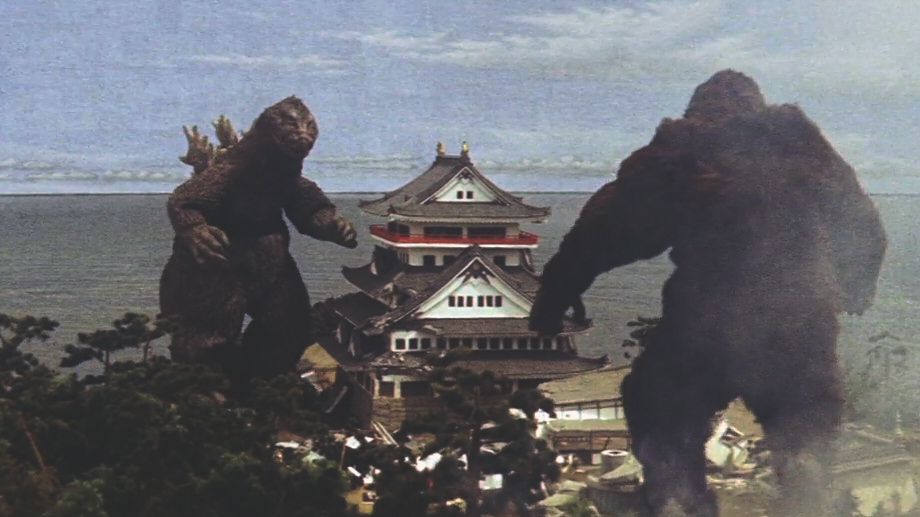 I’m cheating a bit on this one as it isn’t a horror movie by any stretch of the imagination though I there are some suspenseful moments to be sure. But it’s my blog and I’m psyched about the new movie so I decided to check out the original Japanese version of KING KONG VS. GODZILLA after seeing the US cut more times than I can count. It was released as part of Criterion’s stellar Showa Godzilla collection and is well worth picking up if you can get it on sale so you don’t get hit with sticker shock.

If you aren’t familiar with the story, perhaps not having spent your youth digesting various science-fiction theaters and horror host shows on weekends, KKVG begins some time after the events of GODZILLA RAIDS AGAIN. Life is continuing on as normal. A pharmaceutical company is looking for a big draw like their competitors have with the nuclear submarine Seahawk, that is going to be patrolling the Arctic and have its adventures televised. They hear tell about an island that, in addition to berries that create a powerful sedative, might also contain a monster. The head of the company sends out two of his employees to go out and find that monster. Meanwhile, the Seahawk has run into a little issue when investigating a strange light from an iceberg. That little problem ends up being Godzilla, who is now loose after a long and cold slumber and looking to raise some hell. The pharmaceutical employees on Faro Island find that there is indeed a giant monster there, a huge gorilla called Kong. After Kong saves the village and gets drunk on some berry juice, he is captured by the company and shipped off by raft to Japan, where he ends up breaking free and ends up on a collision course with Godzilla and the biggest monster brawl ever seen.

While both the US and Japanese version follow similar plots and, despite rumors to the contrary, have the same ending, they are very different in tone and execution. The US version excised a lot of the pharmaceutical plot, adding faux newscasts instead to fill up the time. As a result, some of the scenes feel disjointed and random as we are missing some key information that make said scenes work. In the Japanese version, we get more backstory on the characters, resulting in actual character arcs for the main players as well as setting up the satire of the television industry that director Ishiro Honda wanted it to be. As a result, the movie feels a whole lot more cohesive and you are more invested in the fates of the main characters, such as the young man trying to find his girlfriend who was on a train heading right towards Godzilla. (Of course later she also gets on a train that ends up getting her taken by Kong so perhaps she should really just stay away from trains.) There’s also a scene early on which shows one of the main characters playing drums for the TV station, which ties in later when he pulls out drums to play part of the native chant to try and lull Kong to sleep. In the US version, there’s no backstory on this so it seems very random that he would have the drums with him at all in the first place.

The kaiju action comes fast and furious in the movie once the monsters meet. In KKVG, the fight choreography has changed since GRA, where Godzilla and Anguirus attacked each other with a more feral nature. Here, Kong and Godzilla are a lot like wrestlers, taunting each other and using grabs, punches and even a dropkick. It adds a playful element and is necessary to give Kong an actual fighting chance, as Godzilla just burning him to death from afar wouldn’t make for a very interesting fight. Godzilla’s costume is one of the finest incarnations of the suit and is appropriately menacing. Kong doesn’t fare as well and the suit isn’t on par with the work of a Rick Baker. That’s not to say it isn’t without its charms, as the creature is supposed to be a giant monster and some artistic license can be afforded so that it doesn’t look exactly like a big gorilla.

One can’t mention special effects without giving praise to Eiju Tsuburaya, master effects technician who handled not only the suits but the miniature effects as well. We are treated to a variety of scenes featuring his work, including several military attacks, a construction scene and city attacks. His work is always breathtaking and it’s amazing what could be done with the intricate model work that was his hallmark.

The actors do fine work, with many of them being Toho players that would go on to other Godzilla films. Of note are Kenji Sahara, Akihiko Hirata (Dr. Serizawa!) and Mie Hama, the latter of whom went on to be a Bond girl. The score is top notch as well, featuring a haunting work by Akira Ifukube and it is easily one of my favorites out of the series.

If you haven’t seen this version, it is well worth the effort to track down, as it is a much more compete movie than the US version and a rewarding experience.