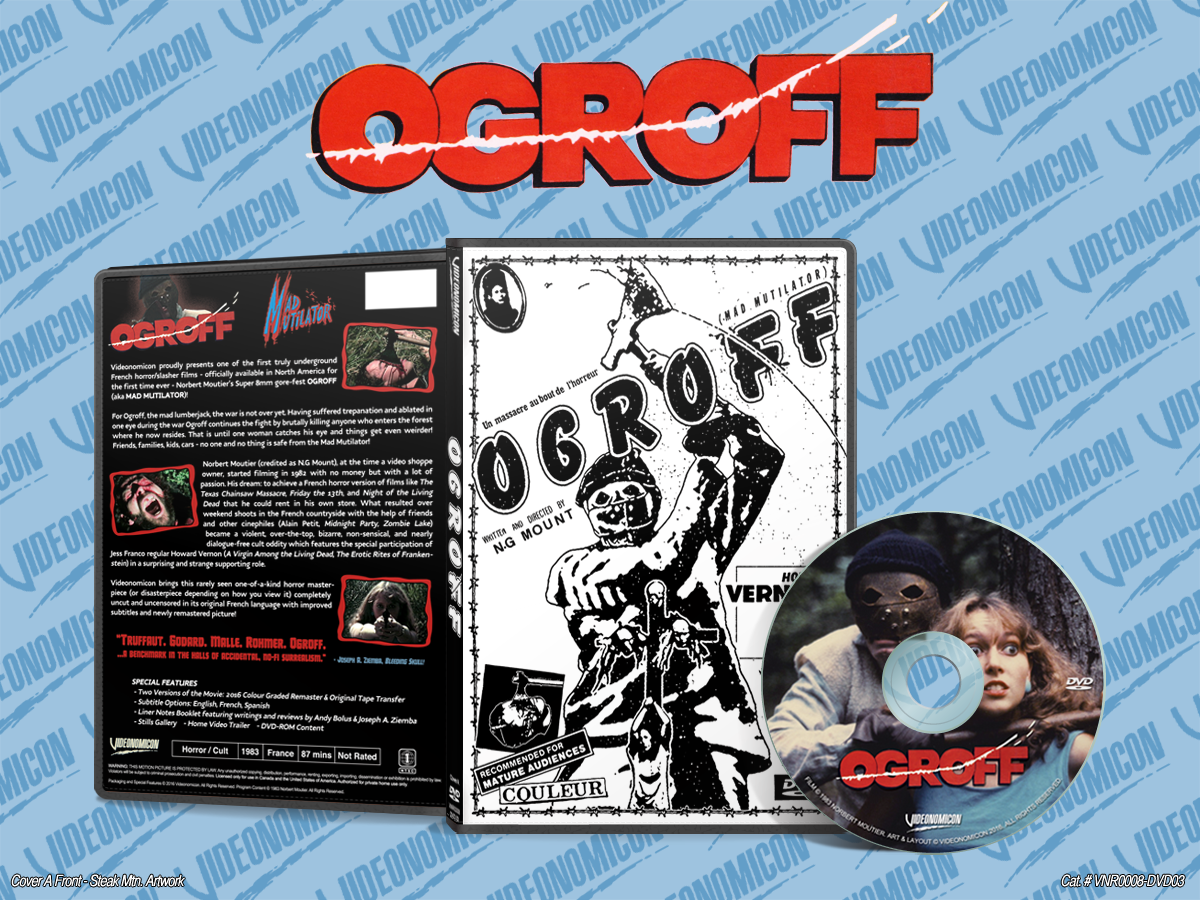 Some movies are easy to pigeonhole into a genre. They have their defining elements and stick with it until the very end. And then there is OGROFF. Also known as MAD MUTILATOR, OGROFF is a French slasher movie (at least to start, anyway) that was shot on Super 8mm by director Norbert Moutier. The titular character is a lumberjack who lives alone in the woods and murders the shit out of anyone he comes across with his trusty axe. Apparently he thinks the war is still going on and is keeping the land free of German invaders. However we only see him killing civilians so he isn’t very good at this job. However we are only told this on the back of the DVD case as they forgot to mention it in the movie.

Mainly because there are about six lines of dialogue in the thing.

That’s right. Due to technical limitations of Super 8mm (and not having expensive audio equipment), most of the live noise that was filmed was covered by the soundtrack and sound effects, so the whole film is essentially dialogue free. It adds a surreal quality to the film, one that is enhanced by questionable cinematography such as blurred subjects that make the Patterson-Gimlin film look like it was in sharp focus. So if you are a purist about such things, you might want to skip it. But despite those technical issues and any semblance of a plot until about halfway through when the movie switches genres, Ogroff has a certain energy to it that keeps you watching and entertained. Sort of like a DEADBEAT AT DAWN where the energy level is what keeps you sticking with it, though not anywhere near the technical level of that film.

The movie starts off with a family stopping by the side of the road so the father can take a leak. His child runs off to play in the woods and is killed by Ogroff. Then he meets his fate at the end of an axe as well. His wife leads Ogroff on a merry chase before she is captured by the masked man. Then it only gets weirder from there as Ogroff kills everyone he comes across. Meanwhile there is a woman who is looking for Ogroff for some reason and also an unknown figure getting their car ready for a trip for most of the film until they come into play at the end. I don’t want to spoil the madness that comes next and you will have to see it for yourself because doing so otherwise would be a disservice to the batshit insanity of the movie. Imagine THE TEXAS CHAINSAW MASSACRE mixed with MADMAN through the lens of J.R. Bookwalter and you are getting somewhere in the area.

It is in no way a great movie, acting, effects, or otherwise, but it is definitely greater than the sum of its parts as somehow it all comes together into an enjoyable mess. Ogroff is a striking figure in his knit cap and his metal mask, and you could see the franchise potential the director saw in such a figure. What little backstory we get in the film is limited to a line of dialogue and some newspaper clippings, the latter of which paint him as a war hero who killed a all the Germans who entered the region. We don’t exactly know why he got so deranged or if he was always that way, and honestly, it doesn’t matter. Especially when we get an axe vs. chainsaw duel out of it.