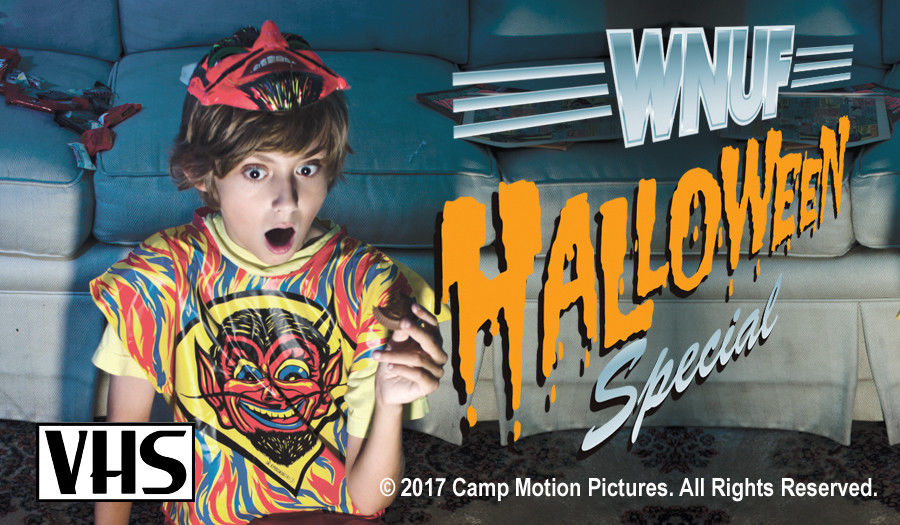 Found footage has been a pretty popular subgenre of horror movie for awhile now. Some of this is because of the way it lets you frame a particular story, but a lot of it is because you can do it pretty cheaply. The WNUF HALLOWEEN SPECIAL takes the format to new heights and creates a fantastic entry with a complete faux newscast. And it does it well. It’s one that I had heard of for awhile but never managed to score a copy of until it premiered on Shudder this week.

The gist of the movie is that after the WNUF evening news on Halloween in 1987, one of the reporters will be doing a live exploration of a local murder house, complete with psychic investigators and a priest (in case an exorcism is needed). This means we get all of the usual segments on the news–including weather–as well as fake commercials for businesses and products based in that era. However we are watching it on a bootleg video tape that someone else is in control of so at times we are fast-forwarded through some of it in an attempt to get to the meat. When we finally do get to the good stuff, it is worth the wait as the exploration starts to go wrong and it seems that there might really be an evil spirit in the house.

Having worked at a TV station, I can say that the WNUF HALLOWEEN SPECIAL really nails the feel and production value of a evening news broadcast. The actors playing the anchors are charming enough but not so much to take you out of the illusion. Frank Stewart (the news reporter leading the investigation) is suitably rogue and wanting to push the envelope for his program and doesn’t mind getting snippy with people, something I had seen as well from the older field reporters. The commercials are fun too, showing off the local businesses with that cheap production value we saw quite a bit on the local stations growing up in the 80s. That said, they are one of the biggest detriments to the film too, as it seems like we are cutting away from the action too frequently for them. Add in the animated bumper with the show name too and you are eating up quite a bit of run time just on those. Granted they do help keep the suspense up early on but late in the game you kind of wish they would space them out more.

I didn’t think the movie quite stuck the landing enough to make it an instant classic. It’s more THE LAST BROADCAST than THE BLAIR WITCH PROJECT in that regard but it is a solid film overall. With most of the movie being rather inoffensive, it would be some fun background noise at a Halloween party. With the way the director managed to give it an authentic feel right down to the bootleg VHS look, it has a lot of charm going for it and feels like a relic of a bygone era.

Check it out as it is definitely worth making part of your Halloween movie viewing.