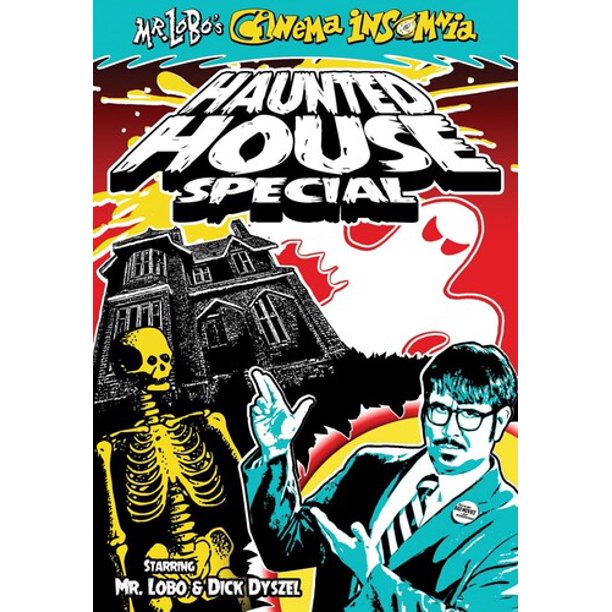 As a fan of horror hosts, I try to seek out the all the different shows I can. One of my favorites is Cinema Insomnia with Mr. Lobo. He is funny and dapper and his distinctive look and style make him easy to spot. Hell, he’s even shown up in a Scooby-Doo episode. As with the majority of the horror hosts, he has intros and outros to the movies he watches and several segments in between. However, for the HAUNTED HOUSE SPECIAL, Mr. Lobo takes the center stage with his Totally Fake Ghostbusters in trying to prove that ghosts don’t exist by investigating the Chestburster house (that is based in part on the Winchester house). Unfortunately for him, a spectral presence there might put an stop to his debunking unless he can prove once and for all that ghosts don’t exist.

In between the story bits, we are treated to trailers for other movies with haunted houses in them. It’s a unique way to do a special and it lands pretty well. The antics of Mr. Lobo and his friends are entertaining and the trailers are good for finding some movies you might not have known about. Plus I’ve always been a sucker for old horror movie trailers so watching a bunch of them and an all new story is like a dream for me. It might not be for everyone but considering what some other movies might have done to pad out the run times, it is much appreciated. I got a kick in particular out of the friends and the logo used by the Totally Fake Ghostbusters, as they were nods to the Filmation Ghostbusters series, right down to having a gorilla helper. Another neat bonus is Svengoolie himself Rich Koz showing up via the telephone as the voice of a doctor.

It’s a breezy and fun tale with a few scares thrown in for good measure but is definitely more on the comedy side of things, which is little surprise to those who are fans of the show. For those who aren’t, your mileage may vary but it is a neat little low-budget effort that is worth checking out this Halloween season. Once you’ve fallen for his charms, you will find yourself as a Mr. Lobo fan.