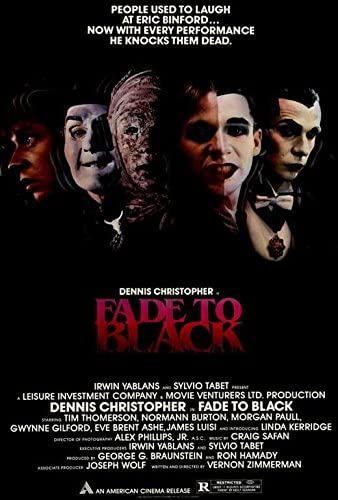 It’s amazing how some movies just slip through the cracks and end up forgotten by the moviegoing public. It makes sense for bad movies but is all too sad when it happens to good ones. It seems like horror movies are exceptionally prone to this and FADE TO BLACK is one of the many that doesn’t get the love that it deserves. Fortunately, it seems like its popularity is on the rise a good 40 years after its release so others will be able to discover this gem.

Eric Binford (Dennis Christopher) is a movie fan. That might be putting it lightly. Obsessive film addict might be a better description. He lives and breathes movies. They are his life. Unfortunately, this obsession has left him a little socially-awkward and a bit out of touch with reality. Eric’s knowledge of the movies is great and his ability to shoot of endless trivia about them amazing, but his co-workers at a movie distribution house don’t care and neither does his rather abusive Aunt Stella (Eve Brent), the wheelchair-bound bully he lives with. That all changes when he encounters a Marilyn Monroe lookalike (Linda Kerridge) who he hits it off with. When she unintentionally stands him up on their date, it is the final straw for Eric’s fragile state of mind and it pushes him into a homicidal state where he kills people while dressed as Dracula, the Mummy and even Hopalong Cassidy. Meanwhile, the police are trying to figure out who is responsible for this set of strange murders and a criminal psychologist (Tim Thomerson) hopes to find Eric first so he can help him.

Let’s be honest, with a setup like that, the movie could have gone in a super-sleazy, ultraviolent direction, painting Eric as some avenger of the bullied and the weak. Instead, we are given a psychological thriller where we are torn between hating Eric and hoping that he gets the help he needs before it is too late. The tight script by writer/director Vernon Zimmerman really paints a great picture of Eric’s life. Sure his boss yells at him and his coworkers pick on him, but he does show-up late and screws up a lot while being rather insufferable so the animosity isn’t unearned. Same with living his life as a layabout and watching movies while his aunt wants him to get out there and make something of himself. She might not be the kindest person but she does have good intentions. It is that fleshing out that makes the murders more shocking than they normally would be as they represent a giant step over the line for the poor boy.

The cast being so strong helps sell this world. Christopher as Eric really gets a chance to shine and show his chops, not only as he descends into madness but also with some great impersonations of characters from the films he is obsessed with. Tim Thomerson is great as the psychologist, with his free-love nature clashing with the strictness of the officers around him, you can see he really cares about helping people, whereas the cops just want to put a bullet in Eric. Brent is fantastic as Aunt Stella and gives a great performance, especially with her bound in the wheelchair for her time on the screen. With folks like Mickey Rourke and Peter Horton in supporting roles, there really isn’t a weak link among them.

It’s a shame that the movie didn’t get more love as it ends up being a great character study with elements of horror and comedy of an obsessed young man and his tragic end.