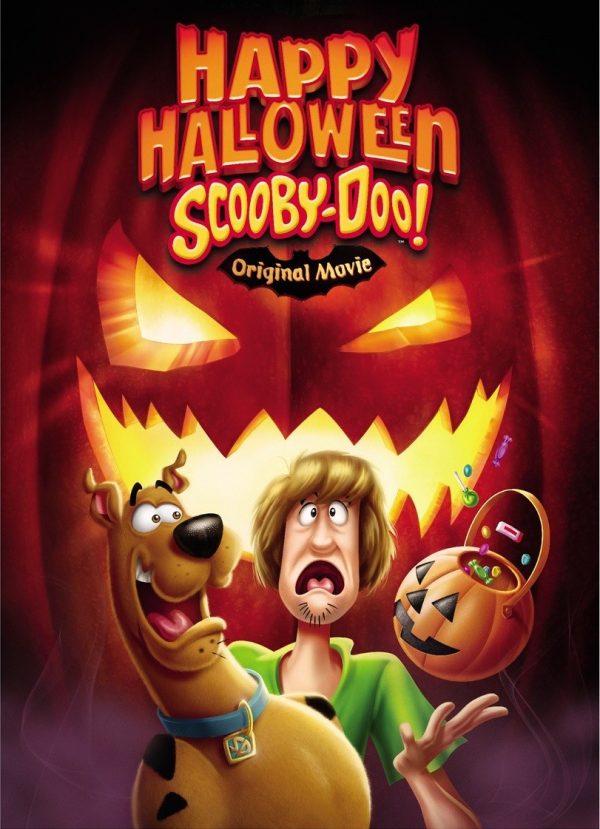 Scooby-Doo cartoons were probably my earliest gateway into horror movies. You got some creepy spooks and kooks but with comic elements helping dull down some of the terror they might invoke normally, making it perfect for kids and adults alike. Having a family of my own, it gives me a good reason (not like I needed any) to check out the new series and movies and see how they fare. Most of the DTV movies vary in quality from great to meh. SCOOBY-DOO ON ZOMBIE ISLAND was the first entry and set the bar for the rest to overcome. Some have come close but most don’t really have the staying power. Fortunately, HAPPY HALLOWEEN SCOOBY-DOO is one of the better efforts and probably my favorite one yet.

The film starts off in media res with the Crystal Cove Halloween parade in full swing (featuring Elvira as the grand marshal!), with the gang tracking down a ghost that is ready to attack. When he does, a fight breaks out and the parade is interrupted and not long after the title has come up, the Mystery Machine is totaled, the monster is captured and then unmasked. With the mystery wrapped up, the gang decides to celebrate Halloween, as it is something they haven’t had the opportunity to do in some time thanks to their crime solving. However, all is not what it seems as a new threat to Halloween is on the horizon that has the gang wondering if there is even someone to unmask this time around.

With a strong start that brings to mind GUARDIANS OF THE GALAXY VOL. 2, it would be easy for the movie to coast and phone in the story and rely on a love for the characters and Elvira to keep interest. It was a pleasant surprise to find that the story and the jokes fire on all cylinders and the downtime is short, for once the new threat is involved, the pace is fast and furious until the end. It is always nice to see Elvira pop up in the Scooby-Doo universe and they give her plenty to do here and she and Daphne make a great duo for their part of the film. I’d say the only thing that doesn’t quite work is the unmasking of the final villain, as if you haven’t seen the other movies he was in, some of his importance might be lost. It isn’t a giant deal and they give you enough flashbacks to make it work.

There are some homages that younger viewers might not get but there is enough else to enjoy that a few things going over their heads won’t matter. All in all it is a fine entry to the Scooby-Doo franchise and I’m excited to see what they come up with next.