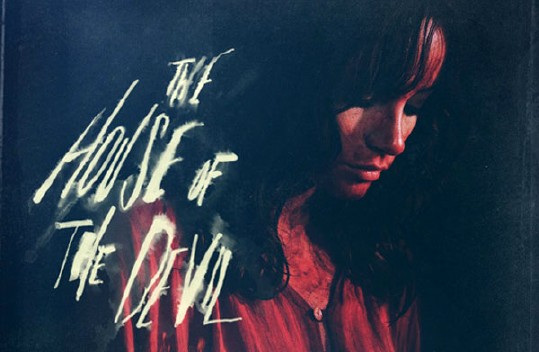 I’m a sucker for a good Satanist movie. They used to be all the rage back in the 70s and 80s but then they sort of died out for awhile. You still got Satantic elements in the films, but none so much as that Satanic Panic era. That’s why I found HOUSE OF THE DEVIL such a delight. Writer/director Ti West’s film not only pays homage to those older films by being set in the same era, it was even filmed to look just like them. If you didn’t know better, you might think you have just turned on some lost film from the 80s instead of one that was made over 20 years later.

The film revolves around Samantha (Jocelin Donahue), a college student who is looking for a new place to stay so she can get off campus and away from her roommate who is having sex all of the time. Personally, I would have just filed a report with the resident advisor to save myself some cash and hassle but to each their own. She finds a place to rent that is perfect for her but sadly, Samantha doesn’t have much in the way of money on her so she needs to find a job and fast. So she responds to a posting looking for a babysitter. The job poster, Mr. Ullman (Tom Noonan) agrees to meet her but stands her up. However he calls back and apologizes and offers more than was initially promised. When Samantha gets to the house, the babysitting job in question turns out to be for the man’s mother. Against her friend Megan’s (Greta Gerwig) wishes, Samantha needs to money and takes the job, not knowing what strange occurrences she is in for on this night of a lunar eclipse.

A far cry from movies that offer a steady pace of gore and scares until the very end, HOUSE OF THE DEVIL is instead a tense and moody film that slowly builds up the strangeness factor until all hell breaks loose in the conclusion. Most of the film involves Samantha on her own in the house, so it is a testament to the actress that she can captivate us for so long just wandering around and reacting to the strange things she hears. This slow-burn lets our dread build with that of the character and it is like we are both in for the same ride, though the audience does have a bit more of a clue as to what threats await our hero.

The craftmanship on HOUSE OF THE DEVIL is incredible, and the way it just oozes the 80s with love and the little details that show that really help elevate the film above what could just been another haunted house-style movie. It’s not nostalgic idolization either, but a genuine attempt to create a cohesive period piece and for the most part, it lands it. I really need to see some of West’s other films as he is definitely on my radar now.