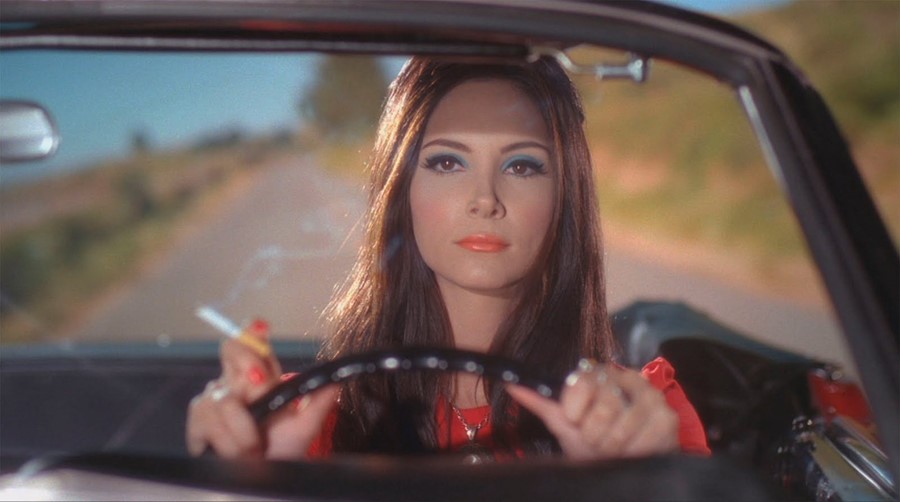 Sometimes there comes along a movie that from stills alone I can tell it is something I am going to love. THE LOVE WITCH, is just such a film, with a brilliant look that harkens back to the 60s, featuring lush colors and surreal lighting that really makes it unlike anything else that has come along in awhile. It’s set in the modern day, but most of the cast look like they could have stepped out of a film from the 60s and often speak like that as well. It took me awhile, but I finally caught it as part of JOE BOB PUT A SPELL ON YOU and I really dug what it was throwing out into the world.

The movie centers around Elaine (played by Samantha Robinson), a beautiful young witch looking to move on after the death of her husband. She finds an apartment for rent in a house owned by her mentor and then promptly starts to weave her spell upon the men she meets. From then on, it’s a series of attempts to find love that end badly for the men. After the first dead lover is discovered, a detective named Griff (Gian Keys) gets onto her case and they end up on a collision course that will end with Elaine and Griff finding a happily ever after, or death.

This film is an absolute treasure trove of fantastic images and scenes and responsible for that entirely is writer/director/editor/producer/etc Anna Biller. Ms. Biller has created an absolutely amazing world. The characters are all kind of weird but in a memorable way that helps enhance the character rather than reduce them to a one-note stereotype. They all have a style of their own, from the femme fatale, etherealness of Elaine to the hard-nosed detective of Griff, to the others that inhabit the world like the coven that also has a Renaissance Fair on the side in the middle of the woods. That scene alone is worth the price of admission as it is so bizarre and out there it is a complete delight. It’s all a great throwback to the acting of a bygone age and comes together nicely.

Not enough can be said about the Technicolor look of it all. Biller really knows her stuff and it shows with the way she has expertly put together a film that, taken out of context, could easily be mistaken for a movie from that era. Some of the lurid colors and effects bring to minds the films of Argento, particularly SUSPIRIA, which makes sense as they both deal with witches. The score–which she did as well–is a dead ringer for the some of the soundtracks back then and really help put you in the mood.

As one might expect, there is an interesting feminist theme running throughout the movie. In that them lies a dichotomy, with Elaine as the Love Witch wanting to give the man in her life everything she can to make them happy, whereas her friend Trish demands more from her husband in the realm of equality. Yet it is Elaine’s method that wins her all of the love, though with that passion ultimately comes tragedy. There’s a lesson there I’m not bright enough to see about love on its own not being enough to sustain a relationship, nor is pragmatism the way to keep both parties happy. There needs to be a balance.

The movie might not be for everyone, but THE LOVE WITCH is a gem of a horror movie that fortunately has gotten the respect it deserves in reviews. It’s definitely worth checking out for a unique experience from the one-woman movie tour-de-force that is Anna Biller.