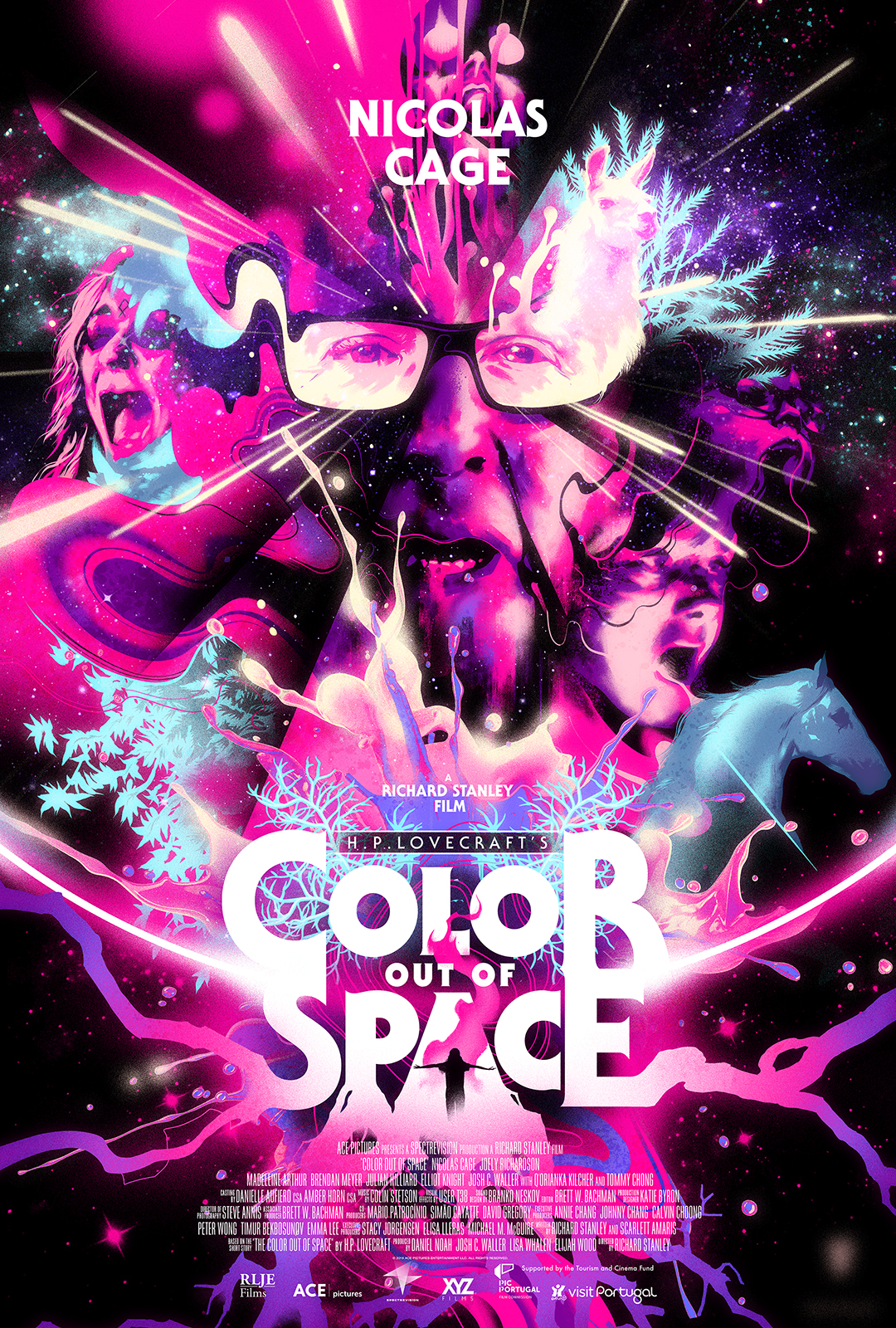 Adapting the works of H.P. Lovecraft is a difficult prospect as some of his works feature otherworldly horrors that are tricky to pull off on a modest budget. Still that doesn’t stop people from trying. “The Colour Out of Space” is a tale that has seen several adaptations of varying quality already, from DIE, MONSTER, DIE in 1965 featuring Nick Adams and Boris Karloff to THE CURSE in 1987 starring Wil Wheaton. While entertaining, neither really captured the full essence of the tale, leaving the field wide open for someone else to make the attempt. Richard Stanley returns to the director chair for the first time since THE ISLAND OF DR. MOREAU in 1996 with a version that swings for the fences in updating and capturing the essence of Lovecraft’s tale for the screen.

For the most part, he succeeds.

In this adaptation, Nicholas Cage plays Nathan Gardner plays a man who moves his family back to his late father’s farm after his wife’s mastectomy. They are slowly finding their way into living life in the sticks when one night, a strange meteorite falls into their yard. The appearance of it makes the minor celebrities for a day until the following night when lightning strikes the meteorite and seemingly destroys it. But when a visiting hydrologist tests the groundwater there, he finds that something much worse has happened and that the Gardners and perhaps the whole town are in danger from an extraterrestrial threat that is slowly changing the area around the Gardner farm into something decidedly otherworldly.

COLOR OUT OF SPACE is a slow-burning film that takes its time in building up the strangeness and the threat presented by the meteorite, much in the way that the story does itself. It starts with a feeling of unease that slowly becomes dread as the full threat of the the color is revealed. It’s amazing how much of this is just from a simple use of color. The neon-purplish pink glow that indicates the corruption is slight at first but then slowly pervades everything as the reach grows. But as much as the special effects bring to life the otherworldly threat as nobody else could before, the cast really helps sell the mental breakdown that they are all experiencing due to their exposure to the color. Cage is great and descends into the unhinged state we expect him to, but Joely Richardson as Theresa, his wife, carries an anger with her, both over her illness and as her mental state deteriorates, that grows and starts to erupt more frequently. Their daughter Lavinia (played by Madeleine Arthur), already concerned over her mother being sick, takes to extremes in hopes that her belief in the occult can save them.

It’s a shame that a lot of the really cool scenes are spoiled in promo shots, and I think a lot of them would land better if they came at you by surprise. Fortunately, Stanley packs enough surprises in the film to make up for it as he leads up for a rollercoaster of a finale. The special effects are pretty wonderful and although most are of the ethereal kind, there are some pretty great and goopy ones that are sure to turn a few stomachs. The plot hews pretty close to the Lovecraft tale, though there is more focus on the dissolution of the family here than in the text and a few moments have been changed to help the climax along.

If you’re looking for a good, weird and creepy time or are a fan of Lovecraft, you will definitely want to let your eyes experience this one.